Copy
Dear friends,
It has been a long time since a previous update from my hand. Simply put; in the absence of having my primary needs met, particularly the lack of a supporting community and basic shelter, I painfully relearned the importance of putting self-care above and before the care for others. A ‘put on your own gas-mask first’ kind of thing.
The realization of the irreconcilable
While gradually descending into a depression and insuing burn-out, it became clear that the partnership between myself and Diego was unsustainable. Despite significant efforts from both sides, up to the point of involving a professional mediator, we were not able to reconsile our differences. Although most ideological projects fail due to differences over the objectives, ours failed on personal and pragmatic grounds and as such it became clear that we should not steward an organisation together. 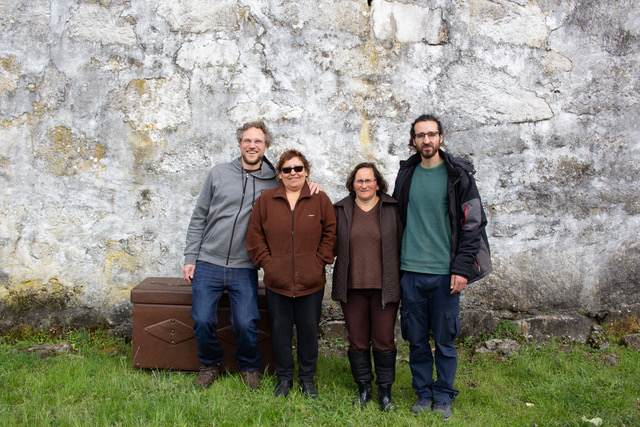 Me and Diego, after signing the contract we discovered the owners burning the furniture in the garden. (gallery)
Ecoaldeia Silverto
Hence, our decision to fully disentangle the two initiatives we co-founded. On the ground, there is the cooperative Ecoaldeia Silverto  realizing a co-housing and regenerative forestry project in Paredes de Coura  Northern Portugal. This was, is and will be my primary focus. We hope to ‘open soon’, once our common house is finally realised. Please feel free to contact us if you are seriously interested in a ‘trial membership’, spending weeks to months living and working on the land. 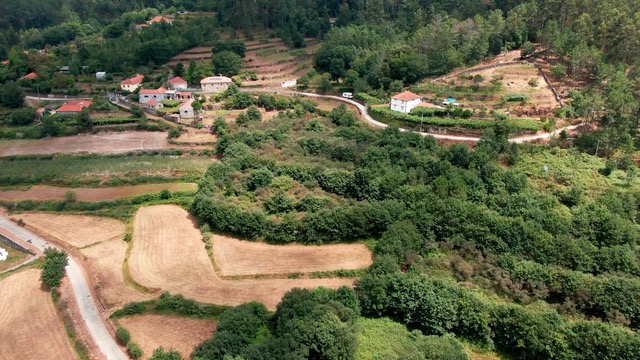 Drone photo of Silverto’s forest, our common house and our neighbors. (gallery)
Stichting Sol Nascente
In an overarching role, there is Stichting Sol Nascente  a Dutch foundation with ANBI status  supporting various projects, including Ecoaldeia Silverto. With donations being tax-deductible for Dutch (and, aparently, German) residents, Sol Nascente is in an excellent position to facilitate donations to individuals and collectives in Portugal and Spain, in order to promote regenerative agroforestry, and anything related to it. (If you wish to support the forest management in Silverto through donations, please contact me.)
By separating these roles, I have been able to slowly recover, and gain tremendous lessons from, one of the darkest periods of my life. The little energy I had, was focused exclusively on the painstakingly tedious renovation of the house in Silverto.
Finishing the common house
After 6 months of construction (with 2 months anticipated for the entire renovation), only the threat of legal action sufficed to merely close the roof from the elements. Concluding professionalism and honesty in the Portuguese construction sector to be an apparent rarity, I ended up working with a Polish team, who are setting up shop in Portugal. Only to discover that our society’s response to COVID-19 has completely disrupted global supply chains as well as the construction sector overall. Materials increasingly harder to get by, delivery times uncertain and suppliers with their usual optimistic expectations.
Soon(tm)… ready to open our doors!
Realistically, we now expect the house to be usable in spring. Doors and windows have been fitted, warm water is already flowing through the place, walls are being finished and soon(tm) we’ll have an actual bathroom. And already, no one will deny that what started as ‘patching things up’ lead to an incredibly positive transformation. 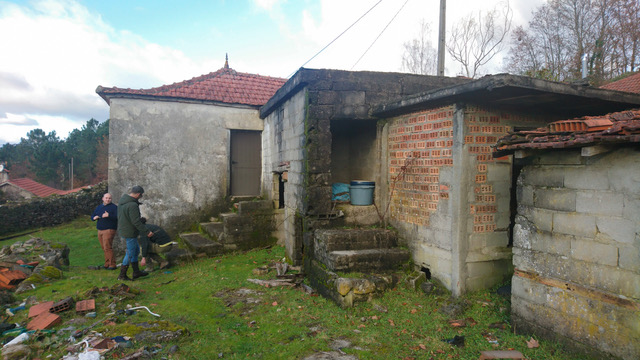 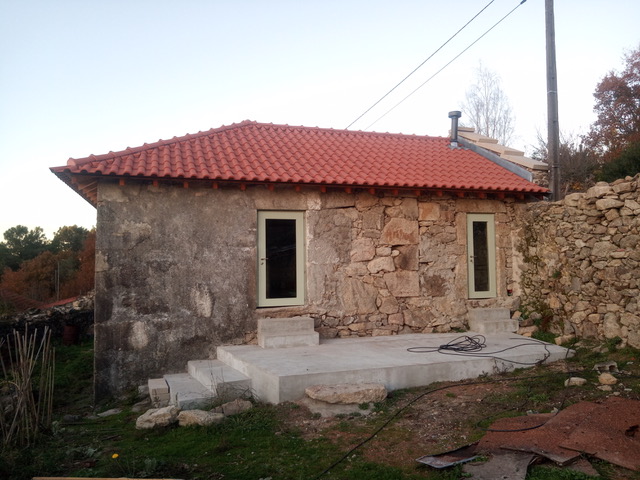 The house, before and after renovation. (gallery)
Light (at the end of the tunnel)
Living in my tent in the forest, on my own, helping alcoholic builders throw stones around (if and when they showed up), I grabbed the first chance I had to go out, in Porto. Somehow, I met a woman, and she changed my life. Hahaha. Susana, former squatter from Wroclav, Poland, came to Portugal to live in and with community. Like me, she hardly went out. Yet, we met that one day in Porto. Somehow, she had wanted to live in the green North, having experienced the tragedy of fire first-hand in Central Portugal. It turned out, we have more than a few things in common, including our stubborness, and to the extend that we can bear with that, we decided to bundle forces and we’re now running Silverto together. 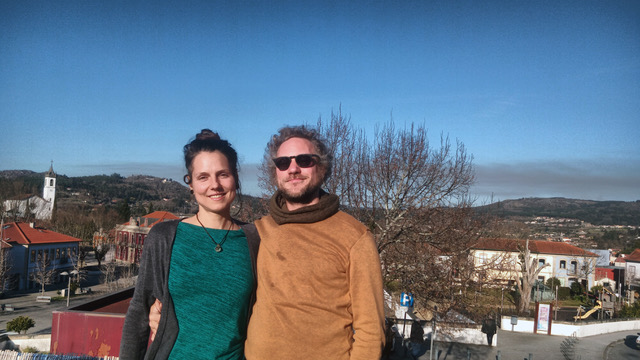 Zuzanna a.k.a. Susana a.k.a Oszka. (gallery)
Through the cooperative, she bought a Mongolian yurt, and for a fraction of the cost she is now living with the thermal comfort most Portuguese can merely dream of, in the middle of the forest. We have started dreaming of putting another and perhaps even a third one, and there’s still the idea of building proper house in a constructable zone. 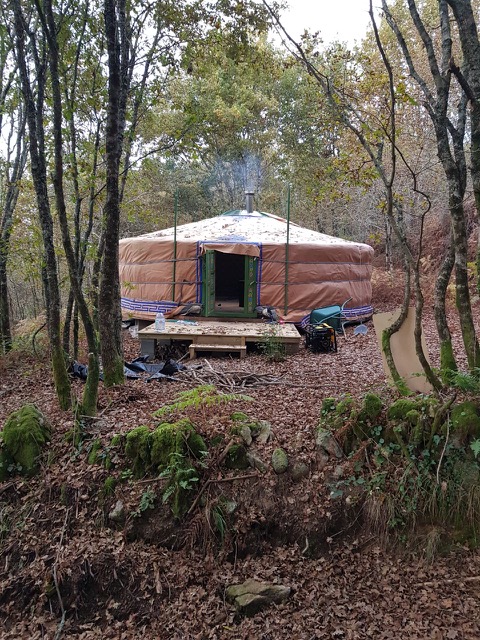 Oszka’s yurt, on the edge of the forest with the fire going. (gallery)
Culture! Hub!
While the virus happened, it seems we’re not alone in escaping urban life. Slowly, but surely, a small community of friendly weirdos - those with guts, those with brains, not afraid to use them, is forming in the area. Of which we are merely a part, at best a catalyzer. We have started weekly work exchanges with some neighbors, which are incredibly fun, making us feel truly connected - and we actually Get Things Done. And soon, our common house can actually take it’s role. Expect weekly get-togethers, friendly dinners, workshops, mystery movie nights, incidental jam sessions and whatever you(!) imagine organising in our space (festival, anyone?). 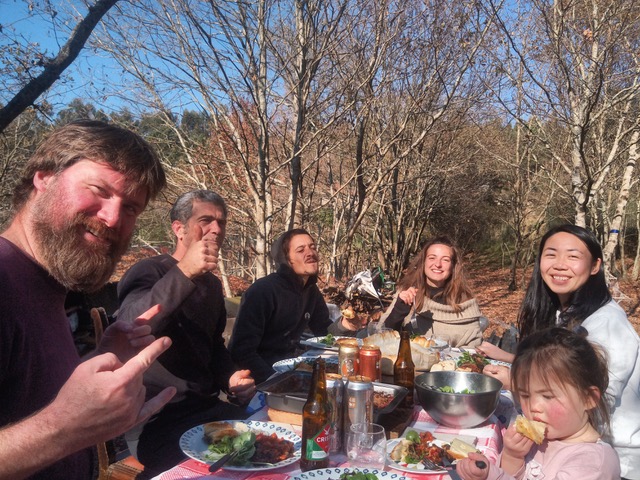 Our third working exchange, having lunch at Rui’s. (gallery)
It’s been an incredible time. Being deeply grateful, seeing that stuff is slowly but surely coming together, to the extend that even a deeply-rooted conflict is leading to renewal and growth, as with pruning. I’m still not there yet, still learning every day - and I might be for the rest of my life.
Will you learn with me?
With love,
Mathijs
P.S. Silverto (now) has it’s own newsletter. If you’ve previously subscribed through silverto.pt, or explicitly selected it, you’re already on it. If not, subscribe here, or this will be the last Silverto update you’re receiving.
P.P.S You can join our conversation on Telegram. I’m not a big fan of it 🤮 but Silverto’s now also on Facebook.
--
Ecoaldeia Silverto, CRLhttps://silverto.pt
info@silverto.pt+351 964 061 972
Newsletter | Telegram | Facebook