It's been a while since our last update, and there's a lot that's happened so.... Let's dive in!

We are now able to operate within the Portuguese bureaucratic and legal landscape, being a multi-sectorial cooperative. Multi-sectorial, for anyone who doesn't know, means we'll be operating in more than one sector. Essentially we'll have two cooperatives functioning as one. That way, we'll be able to manage forests through an agricultural sector. And we'll be able to build houses through a housing sector.

It took us a few tries to navigate getting the paperwork and statutes through the Portuguese bureaucracy. Turns out it can be a bit of a mine-field. (If you can imagine a mine-field in which some mines keep deciding to grow legs, move around, or trade places, while others decide they're really not explosive at all, and some twigs haphazardly lying about are made of TNT and lighters.) Now, they've accepted all our amendments and our cooperative is live! Now, we can start buying things under the cooperative’s name, as Mathijs proudly did the other week (see picture). 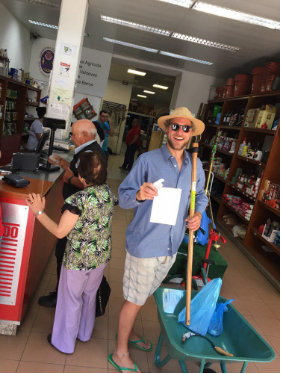 In some personal ego boosting news, we'll likely be the first cooperative in Portugal to use a portion of the housing law known as ' Dereito de habitaçao' or 'Right to house'. By using it we'll be able to keep the houses and the land owned by the cooperative, creating a true commons, while the exclusive ‘right to use’ for the houses will belong to their inhabitants, eliminating both rent and land speculation. We chose this because we think land and forests are best managed communally. Luckily, the Portuguese cooperative law, originating from more revolutionary times, is capable of giving that belief a legal foothold. In addition, it protects both the land and houses from speculation, and enables communal stewardship and true co-ownership of collective facilities, while protecting the rights of inhabitants (and their descendants, who may opt to inherit the right).

In effect, the land will be equally owned by the members of the cooperation, collectively, while at the same time creating a sense of individual responsibility. If you're interested a bit more in the story of our cooperative, at some point in the next few months we'll be writing up a proper explanation of the strengths of a cooperative as well as why we chose it over some other legal structure.

And special thanks here has to go to Manuel Mora at the ECG cooperative in Braga, as well as Cooperativa Integral Minga for giving us invaluable help and guidance. We most certainly would not have been able to do it without them.

With the cooperative, we also launched a very minimalistic website presenting the project. It's only in Portuguese for now, but it's quite lovely in its simplicity. https://silverto.pt 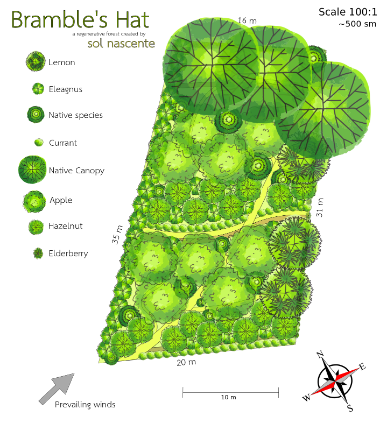 At the beginning of the year we designed and planted our first forest model, geared towards productivity, on land near Santiago de Compostela in Spain. This forest will serve as a prestudy for our future forests, such as our project in Silverto, Northern Portugal.

We've started small. In 500 square meters we've planted trees, bushes, and plants so that in a few years we'll be producing berries like red and white currants, as well as autumn olive. Also fruits and nuts like hazelnuts, apples, figs, and chestnut. All this with processed products in mind, like cider, nut-butter, and jams.

Even with all that, we've left ample space in the design for:

And there’s still space left over for more understory production to be incorporated in later years.

For whoever's interested, here you'll find the design so you can explore it a bit more in-depth. You’ll also find there an Excel that starts with a simplified (and very rudimentary) budget which, if you run through its sheets, will tell you the price of everything, expected profit, production of each species, detail every species planted, and account for the total hours spent on every step of the process.

If you want to talk with us about the details of the model, do get in touch!

A nice visit from some cops.
A few months back, we woke up one morning to cops honking at our door. We didn't know they were going house to house to enforce the fire-code laws that go into practice every year on March 15th. We were understandably concerned (shaking in our boots) as we stepped outside to greet them.

In the end, all they wanted was to tell us that the scrub on the far side of the land was growing within 50 meters of the neighbours house and had to be cut. We had actually been going around meeting people, like the municipal forest engineer, vice-mayor and such, so it ended up being a rather excellent way to meet the police.

They came to us to tell us our scrub (wild bushes) was out of control. We got to tell them about how we're managing the forest, about the paths we've installed throughout the forest, and why we think it's important to let some of the undergrowth grow.

For some context, we're not big fans of the law they were there to enforce since it's really only interested in the short term safety of houses, and I suppose of the people in them too. We like to think long term. And, long term, the best way to stop a wildfires is to have a country of thriving forests populated by as much moist green growth as you can possibly have.

We reassured them the law is the law (we don't want fines or fires) and that we want to comply, yet at the same time, we made it clear that we want as much moist green growth as we can get. That in the long-term this was the most protective forest we could have.

Turns out, that these cops were very understanding and even worked with us on a compromise in which instead of cutting everything to the ground to a neat grass as most people do, we would organize the scrub into managed hedges.

This way they get the ability to move firefighters through the terrain if it ever came to that, and we found a symbiosis between law and management in that we should be pruning the scrub vigorously to stimulate the soil. Now we have an excuse to prune our hedges which will be composed of important regenerative natives like blackberry (super important niche for native wildlife, and magic creator of healthy soils) as well as gorse, codeso, and scotch brooms (nitrogen fixing, soil stimulation, niche creating, organic matter creating ....)

It was a nice visit.

The Present Moment
This brings us to the present moment. The now. Our favorite moment. Let's settle into it for a bit, because life is nice here.....
Deep breath in... out... 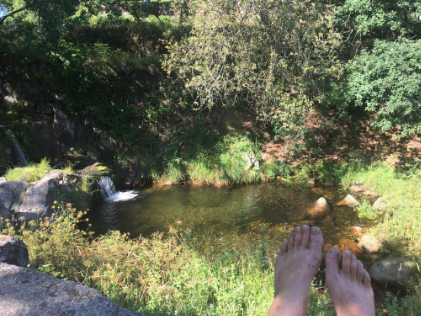 The first project is the forest project. When we first met our gorgeous forest it was inaccessible to most, and only partially accessible to the intrepid few who didn't mind being continually scratched up by thickets of bushes and blackberry thorns. It took us a while, but we soon opened the whole forest with simple 1 meter paths that allowed us to really observe the woods and get a sense of what's there. Now, what we're doing is dragging all the dry branches and wood that would otherwise be a fire risk to the ground where we'll compost it, chip it, and spray it with native microorganisms so that it'll all break down and feed the soil. That is, it'll all hold moisture in the ground instead of making charcoal.

The second project is the housing project. In our first steps, we've had the topography drawn up and we've had the first survey by a local builder. We also chose our architect Nuno Pereira, Porto native and all-around lovely human, to be the third co-founding member of our cooperative. We're really getting a sense of what is and isn't possible, as well as what this whole process will be looking like over the coming years.

This year, the plan is to start renovating the house that is already on the land. It's a traditional Portuguese home (read: cold and dark) that we'd like to make a bit warmer and a bit lighter by the end of the year.

Then, there is the rest of the land, and plans for an extension of the old house, which we'll keep you updated on as soon as more becomes clear.

Moving Forward
The next few months will see us continue on these two central and complimentary projects, namely the housing and forest.

In housing we'll have a few friends visiting in August who will be helping us out with their incredible ability to build stuff. And they'll be working on things like constructing a workshop, tool-shed, and outdoor/indoor composting work space as well as some fixes to the structure of the house.

In foresting we'll begin to accept our first volunteers to really begin to open up the forest without losing that intangible quality of forestness, while at the same time we begin to really delve deep into the design. So for the next few months we'll have our heads in books researching species requirements and interactions, symbiosis, site specifics, and all other sorts of beautiful details that'll feed our first holistic design of the whole space.

If all goes well we'll be able to share it in September, and be able to start planting in October and November.